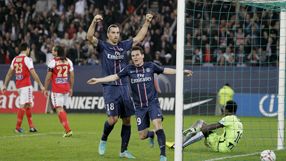 Tennis great Rafa Nadal, who received a PSG jersey from striker Zlatan Ibrahimovic before kick-off, looked on as Reims wasted a chance to go ahead in the 40th minute when Diego's penalty was saved by keeper Salvatore Sirigu after Gregory van der Wiel had handled.

Gameiro, who scored twice last month in the only other league game he has started this season, then headed in a neat cross by Maxwell in the 65th minute.

PSG have 19 points from nine games, ahead on goal difference from Olympique Marseille. Reims are seventh on 14 points.

"It was hard because the international break prevented us from working together," coach Carlo Ancelotti told reporters. "It is important to go top even if it's only for one night."

PSG struggled with an experimental midfield in the first half although Gameiro had an effort cleared off the line by full-back Aissa Mandi in the 29th minute.

Reims twice went close at the end of the opening period, Diego failing to convert his penalty and Maxwell clearing a Pape Souare header off the line.

PSG upped the pace after the break and were unlucky when Blaise Matuidi and Jeremy Menez hit the woodwork before Gameiro finally broke through.

PSG and Marseille are three points clear of Toulouse who are third after crushing Evian Thonon Gaillard 4-0.

Franck Tabanou produced a superb solo effort to give Toulouse a 24th-minute lead. Emmanuel Riviere then scored either side of halftime before Daniel Braaten struck late on.

Valenciennes are fourth on 15 points after they recovered from conceding an early goal to destroy Lorient 6-1.

Lorient, who had Arnaud Le Lan and Innocent Emeghara sent off, are eighth in the table.

Benjamin Corgnet headed the visitors in front after seven minutes before Carlos Sanchez and Anthony Le Tallec replied for Valenciennes.

Le Lan was dismissed after 18 minutes for a bad tackle and Emeghara received his marching orders in the 76th.

Champions Montpellier, who host Olympiakos Piraeus in the Champions League on Wednesday, are down in 16th place after losing 2-1 at Stade Rennes.

Jean Makoun nodded the home team in front from a Julien Feret corner in the 13th minute and striker Mevlut Erding shot past keeper Laurent Pionnier to double the lead in the 52nd.

Younes Belhanda converted a penalty for Montpellier with 21 minutes left.

Second from bottom Nancy had Djamel Bakar sent off in a 1-1 draw with Sochaux while Nice v Saint-Etienne ended in the same scoreline.