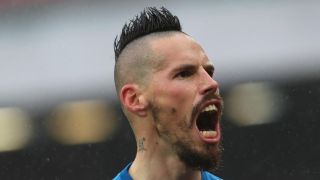 Napoli set a new club record for consecutive league wins in a single season as they stayed top of Serie A on Sunday.

A 1-0 derby win at local rivals Torino earlier in the day had briefly sent Juventus above Napoli, who suffered a shock Europa League defeat to RB Leipzig on Thursday.

But Maurizio Sarri's side reclaimed first place with a 1-0 victory at home to SPAL thanks to a winning goal from Allan, the midfielder scoring his fourth strike of the campaign.

Captain Marek Hamsik thought he had made the points safe with a second-half header only for the goal to be disallowed following a VAR review.

9 - have set their club record of consecutive wins in a single Serie A season (nine). Record. February 18, 2018

Regardless, a ninth successive victory in Serie A sets a new club record for Napoli, who restore a one-point lead from Juventus following their win.

Napoli's average points per game this season now stands at 2.64, with only the Premier League's runaway leaders Manchester City able to better that figure in Europe.