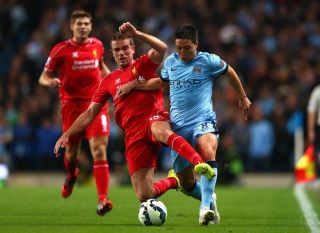 City dealt an early blow to the side they beat to the title last season with two goals from Stevan Jovetic and a third from substitute Sergio Aguero on Monday.

Nasri, who created the second goal for Jovetic, claimed that beating one of their rivals for the top-flight crown carried huge significance at such an early stage of the season.

"Every game at home against a team in the big four is like six points," he told Sky Sports. "We had to make a statement, it was important."

Jovetic, who only scored three league goals in an injury-hit campaign last year, was influential for Manuel Pellegrini's side and was rewarded with two neat finishes.

The Montenegro international was delighted to have opened his account for the season in the "important victory" and hoped it was enough to keep him in the City first team.

"There weren't so many beautiful moments [at City] until now," he said. "But that's past, I want to enjoy this season and win titles.

"It is difficult [to stay in the side] but I will just do my best, then he [Pellegrini] decides."