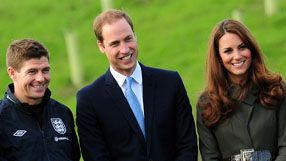 Prince William, the FA President, was not born when plans for a national centre were first discussed 37 years ago and now the race is on for the England team to win a major trophy for the first time since 1966.

The FA, which also invited over 1,000 football dignitaries and media to witness their landmark occasion, hopes the state-of-the-art facilities will result in silverware within 15 years as well as leading to 250,000 new top-level coaches finding their way into the game.

"The lads are buzzing and feel really lucky to have facilities like this," England and Liverpool captain Steven Gerrard told reporters. "I hope it makes a difference.

"We've got the best stadium in the world and now the training facilities too so we have taken away all of the excuses for the future. Football these days is all about preparation and recovery at the top level."

Set in the Staffordshire National Forest in 330 acres of land-scaped parkland, the centre will be the training base for all 24 England teams.

England manager Roy Hodgson said: "We have a great national stadium and now a national training centre too. Facilities don't make a better football team; it is the work you do within the facilities.

"I'm rather hoping that the work that will go on here and the amount of effort we'll put in here to help produce better players and coaches will lead us one day to that elusive World Cup victory."

St George's Park is also the home of FA Learning, the FA's educational department, national coach education courses and a platform for the communication of The Future Game philosophy, which outlines a vision for the development of English football.

The complex has evolved after exhaustive world-wide research into the best sporting facilities. FA staff visited their international counterparts at Clairefontaine (France), Zeist (Netherlands), Coverciano (Italy), the Ciudad del Fútbol (Spain) as well as Premier League clubs including Arsenal and Manchester United to learn from their setups.

Among the key details at St George's Park are 11 outdoor pitches, including an exact replica of the Wembley Stadium surface; a full-sized indoor pitch and a massive indoor sports hall.

There is also a bespoke sports medicine, rehabilitation and performance centre, creating the most advanced facility of its kind in the United Kingdom.

Like the rest of the facilities, they will be made available for use by national and international football clubs, as well as other sports and business organisations to drive excellence in performance.

Two onsite hotels have been built to cater for the national sides, groups or team bookings, along with major sporting or business conferences and banquets and will provide accommodation for residential courses.