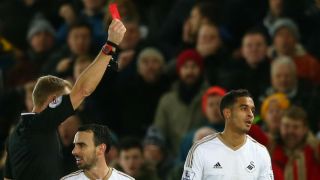 Swansea City's appeal against Kyle Naughton's red card in Wednesday's Premier League clash with Sunderland has been upheld and the full-back will be available for Monday's game with Watford.

Naughton was dismissed before half-time for a challenge on Sunderland midfielder Yann M'Vila in the relegation six-pointer which the Wearsiders went on to win 4-2.

"A claim of wrongful dismissal for Naughton in relation to Swansea City's game against Sunderland on Wednesday, January 13, 2016 was upheld."

Naughton's sending-off was one of several decisions from referee Graham Scott and his assistants that were heavily criticised with Jermain Defoe's opening goal coming from an offside position while Swansea were awarded a penalty when Andre Ayew seemingly kicked the turf under pressure from Wes Brown.