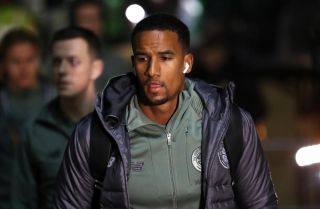 Sinclair netted his first goal in English football since October 2015 to begin justifying his move from Celtic, haunting the club he helped guide to promotion to the Premier League back in 2011.

But his former employers had the final say, Liverpool loanee Rhian Brewster levelling up for the Swans as both sides saw their promotion aspirations take a small setback.

Neil said: “We hadn’t really worked any good movement. It’s a great goal for us and that’s why he [Scott] is in the team.

“All the top teams have got somebody who can do something out of nothing. It’s always important for a forward to get his goal, especially when you sign a high-profile signing like Scott who has played at a high level, played at certain clubs and won things.

“Everyone’s thinking, ‘Go on, then, show us what you’ve got’, and Scott’s put that to bed. I thought he looked sharper.

“In the first half I was disappointed. We didn’t compete enough or risk the ball enough at the back. We turned the ball over far too quickly.

“You need to fight and earn the right to play. We did all that in the second half. We risked the ball in certain areas, made it stay alive and everything about us was better.

“I’m sure all the Preston fans are greedy, so they want their team to play well, win games and dominate opposition, regardless of who you’re playing. That’s what I’m like.”

Sinclair – the play-off hero for Swansea nearly a decade ago – opened his Preston account against the run of play, curling a delightful effort into the corner in the 28th minute.

The ex-Manchester City man celebrated the goal with gusto but the joy was curtailed when Brewster was presented with a simple tap-in just five minutes later.

Preston pressed for the winner in an end-to-end and error-strewn finish to the game, but Freddie Woodman held firm for the visitors to parry Patrick Bauer’s header as the Swans held on for a point.

“We go 1-0 down completely against the run of play and you’ve got to stand up and be counted,” said Swansea manager Steve Cooper.

“The second half wasn’t quite like the first half, it was a little but end-to-end and we turned the ball over a bit too much for my liking, but at the same time we got into some good positions.

“Rhian worked hard, looked a threat – I’m sure he was hard to mark for the Preston centre-backs. He got into the place we wanted him to be.

“We were never going to be a club that was spending loads of money. If anything, we’re looking to save money. That is the case now.

“I think the club might be in a better financial position with some of the business that’s been done. That’s where we’re at.

“We knew we had to be on the front foot and competitive and in the large, apart from the goal, we defended quite well.”