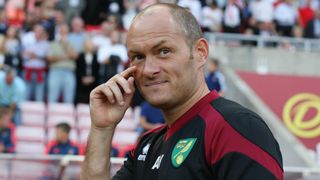 Norwich City boss Alex Neil is anticipating an attacking encounter with Bournemouth on Saturday given the "fearless" Premier League start from both sides.

Both newly promoted teams have taken four points from their opening four matches this season before they lock horns at Carrow Road on Saturday.

Neil is confident the clash will offer more exciting football, especially as he prepares to welcome new signings Matt Jarvis and Dieumerci Mbokani to his matchday squad.

"Ourselves and Bournemouth have both shown no fear in the Premier League so it will be an attacking game," Neil said.

"Mbokani is probably a little bit short in terms of match fitness. He didn't really feature for Kiev during their pre-season so in terms of starting he would be a little bit short but he is in contention for the squad. He has looked good in training. He is big, strong and offers us something we didn't already have. I am hoping he will be a useful addition.

"With Matt [Jarvis], I just think we needed a bit more pace and creativity on the flanks. We have Nathan [Redmond] on one side and Robbie [Brady] can do that as well so we wanted a bit more competition to give us that pace to get us up the pitch and a good outlet. He certainly brings that. Matt will come into contention. He has trained with the squad this week.”

Striker Lewis Grabban issues an apology this week after going AWOL ahead of Norwich's League Cup meeting with Rotherham United, but Neil says he is not yet ready to return to action.

The Scot added: "The bottom line is Lewis broke the rules, he was punished and he accepts he has done wrong and paid the consequences. At the moment he is training to get his fitness back up, obviously he missed a couple of weeks training from being suspended.

"He recognises he has done wrong so he must pay his dues until he works his way back into the squad. As far as I am concerned, the matter is pretty much done. He won't be in contention this weekend."

However, Neil insists he will not discount Kyle Lafferty from his plans despite having not used the striker - who scored Northern Ireland's invaluable equaliser against Hungary this week - so far this season.

"Kyle has been injured, that is why he was not involved. He had only just recovered so his games for Northern Ireland came a bit quick for him. Kyle is the same as every other player, he trains with the first team squad so he is in contention the same as everybody else."