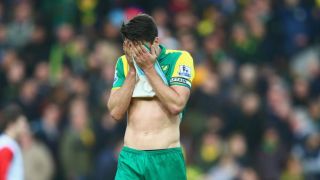 Norwich City were the architects of their own downfall on Saturday according to Alex Neil, the manager labelling his side's defending "a shambles" in a 5-4 loss at home to Liverpool in the Premier League.

Norwich, having fallen behind early, found themselves 3-1 ahead just before the hour mark at Carrow Road, before some sloppy defending allowed Liverpool to take a 4-3 lead into stoppage time.

There was still time for Sebastien Bassong to seemingly rescue a point at Carrow Road, but the home team could not hold on, failing to clear their lines as Adam Lallana fired home a dramatic late winner.

"We were the architects of our own downfall," said Neil. "When you score four goals and don't win, it's a big problem.

"Our decision-making at the back was poor to say the least. We couldn't defend our box. It's concerning.

"It's really frustrating. We had the game in our hands but it turned into a bit of a shambles.

"If you don't defend properly you get punished, at this level you need consistency.

"We were well set up and if anything, throughout the game, I thought we were the better side but when you concede five goals you deserve to lose the game."