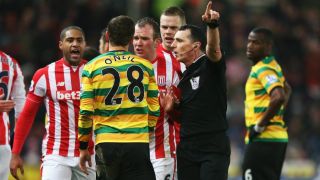 Norwich City manager Alex Neil admits he has no complaints over Gary O'Neil's red card in the 3-1 defeat to Stoke City on Wednesday.

O'Neil was shown a straight red card just before half-time after a reckless two-footed lunge from behind on Ibrahim Afellay.

A stunning strike from Jonathan Howson cancelled out Jonathan Walters' opener just after the break, but Norwich's hopes of earning a point were dashed thanks to Joselu's drive and Ryan Bennett's own goal.

The defeat means Norwich remain five points above the relegation zone, leaving Neil to lament the dismissal of one his more experienced players, admitting referee Neil Swarbrick made the correct decision in giving the 32-year old his marching orders.

Neil said after the game: "I think it was just a bad decision form Gary. The ball's going aimlessly at the halfway line and I don't think there were any flashpoints before that could have riled him up.

"I was surprised as much as anybody else to see the tackle that went in."

"There's no defending it. It was certainly a sending off and Gary's come in to apologise to his team mates at half time.

"It was absolutely out of his character and to make that decision in what was such an important game for us was silly to say the least."

And Neil was left in little doubt that O'Neil's dismissal was a key factor in his side's defeat, adding he was pleased by his side's start at the Britannia.

"It made our task a lot more difficult because up until that point I though we started the game really well," he said. "I thought it was a relatively even game and you could even argue that we might have shaded it.

"We were pleased with how the game was going and obviously that was a big turning point. It handed Stoke a big advantage."