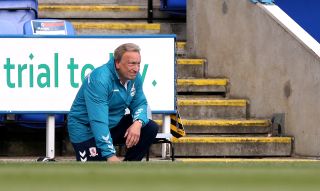 Neil Warnock plans to take Middlesbrough to the “other end of the table” after the club confirmed he will be in charge next season.

Warnock succeeded Jonathan Woodgate in June with the club in danger of relegation from the Sky Bet Championship.

But Warnock won four of his eight games in charge for Boro to finish 17th and the 71-year-old veteran is now planning for next season after admitting “I must have retired about five times now”.

Neil Warnock is staying on as #Boro boss and will lead the club next season 👍 #UTB— Middlesbrough FC (@Boro) July 28, 2020

“It’s been hard work, make no mistake. But this is a great club, and I’d like to take it towards the other end of the table.

“I just felt it was the right thing to do, to continue to shape the squad and take it forward. That’s what I’m going to try and do.”

Warnock, who has a record eight promotion successes as a manager, spoke to club chairman Steve Gibson about extending his stay in the north east after Boro’s Championship status was secured.

He had held discussions with their recruitment team and offered advice for future planning even before his own situation was resolved.

“Steve asked me for a true appraisal of everything and that’s what I did,” Warnock said.

“He was very helpful, he wants to improve the things I want improving and take the club forward.

“I must have retired about five times now, but there’s always something that’s brought me back, a challenge, helping somebody out, and this is a similar situation.

“It won’t be easy, we need quite a large influx of players and I’ll be doing my best over the next few weeks to get the right ones.

“Neil Bausor (chief executive) is helping as well, we’re all singing from the same hymn sheet really in terms of improving the squad.

“There might have to be sales as well but you don’t know what’s around the corner regarding that.

“It’s important that it’s a lot more structured squad than it has been and there are more options, especially defensive wise.

“We’re trying to change the squad around, and we need a bit of luck because you need the new lads to settle quickly.

“Some do, some don’t, but some of the players I’m trying to sign have been there and done it all, I want one or two down that spine who can change the mentality.”

Boro sacked Woodgate after a 3-0 home defeat to Swansea – the first game following the coronavirus lockdown – left them above the relegation zone only on goal difference.

Warnock, who took Cardiff from the foot of the Championship to the Premier League in 2018, likened himself to Red Adair after saying he only gets “trouble-shooting jobs”.

“But it has been enjoyable, the players have given me everything and I’ve had a great response from them.

“That’s all I could ask for, and it was great to get the wins. We’ve not done it at home yet but hopefully when the fans come back we can start performing at home as well and have a real good go.”