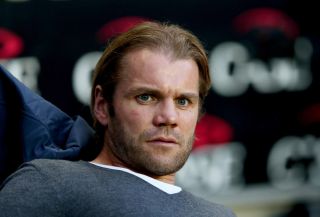 Dundee United manager Robbie Neilson says the job is far from over despite taking a 1-0 lead into the second leg of the Ladbrokes Premiership play-off semi-final against Inverness.

Paul McMullan’s 77th-minute strike proved to be the difference for United as they take the advantage to Tannadice on Friday.

Inverness had been reduced to 10 men early in the second half when Liam Polworth was shown a straight red card.

Neilson was delighted with the victory but expects Inverness not to go down fighting.

He said: “The job is far from done, we need to realise that when we go to Tannadice it will be a tough night.

“Sometimes it can be hard to break teams down with 10 men as they can always be a physical threat.

“We are just glad to see it out and get the goal cushion.

“It was important to be patient especially when they had 10 men, we had to be direct at times as we were desperate to get the goal.

“We have had some good battles against Inverness, they can be physical but they also play some good football.

“We know they’re coming to Tannadice with nothing to lose and we have to stand up to it as they will come with all guns blazing.”

Inverness manager John Robertson took a lot of encouragement with the way his team played with 10 men and said they are not out of the contest yet.

He said: “I didn’t think United opened us up too much.

“We looked comfortable enough and there was not a lot happening in front of Mark Ridgers.

“We feel hard done by, had the game gone into the second leg level it would have set us up well.

“But it is not dead, we’ve got a great away record, it is all still to play for.

“We are going to go there and give it everything we’ve got.

“We knocked the ball well, we were in good control of the football tonight, but we needed that cutting edge in the last third.”