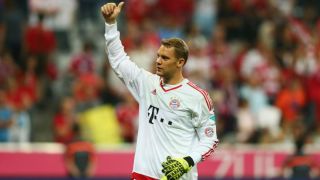 Manuel Neuer has urged Bayern Munich to fly out of the traps in both domestic and European competition after the winter break.

Bayern sit eight points clear at the top of the table and face a Champions League last-16 clash with Juventus next month, and Neuer stressed the need to give each tournament equal consideration.

The goalkeeper accepted that the Champions League remains the Holy Grail for the Bavarian outfit but he doesn’t want to see their league form fall away during their pursuit of the one trophy still to allude manager Pep Guardiola in Germany.

"I know that things can change quickly. Especially if you don't start well in the second half of the season you can get into trouble,” he said.

"We can't afford to feel too safe in the Bundesliga and the German Cup. Those are important competitions as well. But it's true that for many of us the Champions League is the most important trophy."

Looking ahead to the two-legged meeting with Juve, the German international said: "With Juventus we're up against a good side. Juve know us well, too, and they also won't be happy to have to play against us. Those are moments where you need to be in a better form that your opponent. We need every player and need to avoid any more injuries.

“We had more than enough injured players in the first half of the season but we still did our job quite well. We are where we are meant to be. We are looking forward to those big games and moments in the Champions League.

"They have a number of good players, not just [former Bayern player Mario] Mandzukic. I don't think that he will play any differently just because Pep is our manager."