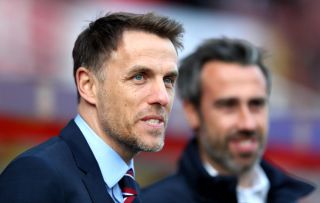 England manager Phil Neville revealed he wanted to see him players “suffer” in their narrow friendly win over Spain to prepare them for this summer’s World Cup.

Beth Mead finished off a smart team move to give the Lionesses the half-time lead with Ellen White thrashing home just seconds after the restart.

Spain pulled one back through substitute Aitana Bonmati but England played out the remainder of the contest to seal a 2-1 victory.

Neville, true to his word ahead of the friendly double-header, made plenty of alterations from Friday’s 1-0 defeat to Canada as only Rachel Daly and Toni Duggan retained their places.

But he pointed to a double change on 54 minutes as the point in the contest where he wanted to present his players with the challenge of coping with Spain – ranked 13th in the world.

“I made two substitutions just after half time because I wanted us to suffer,” he said.

“I wanted the team to suffer and see what we were like with them charging at us.

“I knew the subs would break the rhythm of our team but I wanted to show how our back four would cope, how our goalkeeper would show up and the midfield players would dig in and not just think we are going to have the ball because that is what we have worked on in the last 14 months.

“For us to do well at a World Cup, there are games when we have to dig in and block shots – that is what I wanted to see and I just said to them that I thought they could have done it better, the next step is to dig in but show composure as well.

“My players were stretched and it was quite fun watching them outside of their comfort zone, shattered and running from side to side, it was a really good workout that went exactly how I wanted it to.”

Neville, whose side has two further warm-up matches against Denmark and New Zealand, before England’s World Cup gets under way with a June 9 clash against Scotland, felt the game at Swindon’s Energy Check County Ground would have been an easier evening had he not opted to make a total of six substitutions.

“I then made the substitutions which meant it was never going to be a 3-0, 4-0 game but I think if we had kept the same team we would have won that at a canter because they had gone at 2-0.

“It gave them a bit of impetus and confidence, we broke our rhythm and it became a boxing match then when they kept punching us and punching us but we didn’t go down.”

Manchester City midfielder Jill Scott captained England for the first time in her career and Neville singled out the 32-year-old for special praise.

“I’ve got to say, I thought Jill Scott was unbelievable from start to finish,” he added.

“In training yesterday she was sensational, first time she has ever captained the team and we made a presentation to her before the game.

“Jill is the type of person you can take for granted, she comes in, she bounces around and keeps everybody happy and people think Jill is just okay.

“But I have to say over the last 14 months, I’ve not probably given her enough credit because I just think Jill is always going to be there and not let us down.

“Tonight I thought giving her the captaincy and presenting it to her in front of the girls was a special moment for her, 134 caps I think she has got but she still enjoys every moment of football and she is vital to us.”