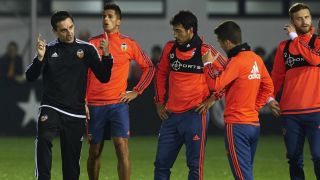 Gary Neville says his future does not lie in management, just a month after being appointed head coach of Valencia.

The former Manchester United captain has only just started his first spell as a number one, appointed Los Che boss until the end of the season, having served an apprenticeship under England's Roy Hodgson.

But somewhat surprisingly, the decorated former defender has already revealed he does not expect his long-term future to be in the dugout.

"I'm not going to say where I want to end up, and it isn't in management or head coaching, so I want to be clear about that," Neville told Sky Sports.

"That's not my ultimate goal of where I want to be. From my point of view, I was really enjoying what I was doing, I really was, the multiple things I had on, even though I knew it was coming to a point where I had to make decisions at the end of this season.

"This came at the right time, because it has allowed me to think: 'OK, four, five years out of football, I've experienced a lot in the different facets of football.'

"Whether media, broadcasting, head coach, assistant manager with England, being a part-owner of a football club and seeing it from that side, and the other business stuff I do.

"I've always wanted to experience as many things as possible. But it was getting to that point where I need to come away from everything and concentrate on certain things."

Neville's next assignment comes against Real Madrid on Sunday, with Valencia 11 points off the Champions League qualification places in La Liga as the Englishman chases his first league win at the helm.

If Valencia are to have any success in the game, Neville will have to find a way for his players to limit the influence of Cristiano Ronaldo, a player he spent five years with at Manchester United and plenty of time analysing as a pundit.

"I know how good [Ronaldo] is. I've not spent a massive amount of time thinking about him, and that's not paying disrespect to him," the Valencia coach said.

"When you're playing against Cristiano Ronaldo you can plan all you like for it, but on his day he can do something special; a free-kick from 40 yards, something ridiculous on the ball.

"I'm more thinking about the positions the defenders need to be in to give themselves the best chances of stopping him, and the midfielders."