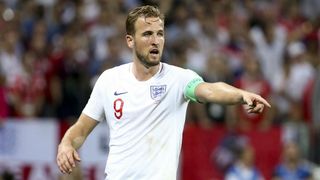 Gary Neville claimed England's Harry Kane appeared to be playing with an injury throughout the World Cup knockout stages after the striker misfired in the semi-final defeat to Croatia.

Kane, who scored six goals in Russia to equal Gary Lineker's record for England strikes at a single World Cup, struggled as Gareth Southgate's side slipped to a 2-1 extra-time defeat at the Luzhniki Stadium that ended their hopes of glory.

Former Manchester United and England defender Neville, who was capped 85 times in a 12-year international career, said he believed an injury hampered Tottenham talisman Kane in the last three games of the campaign.

"I'd be amazed if we didn't learn in the next few days that Kane wasn't carrying an injury since the Colombia game," Neville said on ITV Sport. "I'd be amazed.

"He wasn't even moving around in the second half against Colombia. Against Sweden he was static.

"It's not an excuse, he's just not looked right."

Neville gave an optimistic outlook on England's prospects after they exceeded expectations at the World Cup, and said Southgate's men were now better equipped for high-pressure situations.

"They're the youngest team in the tournament," said Neville. "I hope they have the opportunity again with 20 minutes to go from a World Cup final. They've brought everyone with them.

"Three weeks ago, there wasn't even a connection with the England football team. People looked upon it with some sort of despair. Now, everyone has loved the last three weeks and everyone can be proud of that."

"There's no doubt there's been progression from two years ago against Iceland," he added, referring to England's elimination from the 2016 European Championship in a 2-1 defeat to the competition's smallest nation.

"The players found it difficult to cope with the pressure in that game. This team can now cope with better moments and better pressure.

"Gareth has been fantastic and he'll be so disappointed."