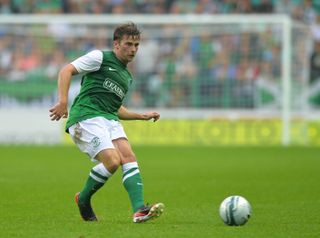 Hibs had lost their last two meetings with Hearts 1-0, but took the lead through James Collins after an hour at Easter Road.

After Ben Williams fumbled Smith's goalbound effort, the forward was first to react to the loose ball and saw his second effort find the back of the net courtesy of a deflection off Ryan McGivern.

However, Hearts' joy was shortlived as Jordan McGhee fouled Lewis Stevenson in the area and home captain Liam Craig converted from the penalty spot.

The win moves Hibs into sixth, while Hearts remain bottom, having missed out on the chance to move into positive points following their 15-point deduction for entering administration.

Earlier in the day, a debut goal from Adam Cambpell was not enough to prevent St. Mirren losing 2-1 at Kilmarnock.

The Newcastle United loanee, who completed a temporary move to St. Mirren on Boxing Day, opened the scoring at Rugby Park after 17 minutes, but the hosts levelled before the half-hour mark courtesy of Rory McKenzie's long-range strike.

Kilmarnock then secured a first victory over St. Mirren in five attempts, and leapfrogged their opponents in the table, through Kris Boyd's injury-time winner.

The 30-year-old striker latched onto Robbie Muirhead's throughball to register his 12th league goal of the season and earn a second successive home league win for Allan Johnston's men.