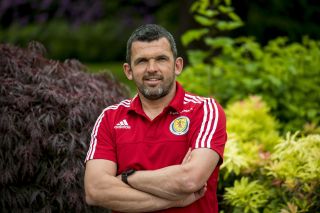 Callum Davidson feels challenging himself as a coach in England has helped him return to St Johnstone as manager.

The 43-year-old left McDiarmid Park in 2018 following five years as Tommy Wright’s assistant to take up a coaching role with Stoke.

The new job only lasted six months until Gary Rowett, his former Leicester team-mate, was sacked as manager.

However, Davidson this season reunited with Rowett to become Millwall assistant manager and the pair helped the Lions move from relegation contenders to serious play-off hopefuls in the Sky Bet Championship.

The former Scotland left-back admitted it was tough to leave south London just ahead of the resumption of their promotion push but one phone call from Saints chairman Steve Brown convinced him to succeed Wright and start his managerial career at the club where he began and ended his playing life.

Davidson, who also had a spell working with Scotland manager Gordon Strachan, said of leaving Perth for England second time around: “It was good for me because I worked with Tommy for five years and it was his management style.

“Working under Gordon and Gary, they had different styles. What it showed me was that not one style works. It’s basically what style you are comfortable doing, and that’s what I will find out myself when I get into the job.

“That’s probably the biggest thing, not to copy somebody, it’s just to be yourself and manage the way you want to do it and how you are comfortable.

“That’s why I am here now, because I could have stayed at Millwall, I had a great job there.

“I want to challenge myself and being down the road has helped put me in this position. It probably gave me a better overall picture of how to manage.

“Football down the road is probably more educational side. It’s more how to improve players. Managing players is slightly different to when I first started when I had Paul Sturrock and John Blackley shouting in my face from about a foot away. At least now it will be two metres away.

“But it has changed, young players coming through now are just used to a different way and it would be stupid of me to go back to the older times. You have to adapt and that’s the process I have probably learned most down the road.

“My management style will probably be different to other people’s. I will find my way into the job. I was going to say I’m not going to be a bawler and shouter, but I might be in the end….”

Davidson has been given a three-year contract in another show of faith from Brown, who faced the task of replacing the club’s most successful manager of all time when Scottish Cup winner Wright stepped down in May.

But the former Blackburn player has not even considered those ramifications.

“I was here for five of the seven years with him,” Davidson said. “It was a great time in the club’s history but it’s gone now.

“I am not going to be stupid, I’m not going to make wholesale changes because what Tommy did was so successful. There will be little tweaks here and there to try and move forward.

“It’s something that has never played on my mind, how successful it was before me taking over. I just want to do the best I can do and hopefully that breeds success for St Johnstone.

“Tommy’s been fantastic for seven years but it’s about looking forward. What can I do, can I help players get better? Can I help young players move on to bigger and better things? I will be pushing them to get better.”