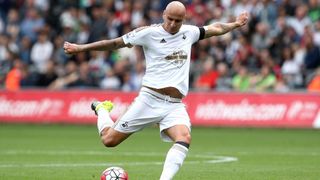 Newcastle United have completed their second signing of the transfer window, with midfielder Jonjo Shelvey joining from Swansea City on a five-and-a-half-year contract.

Shelvey has been an important figure for the Swans since arriving from Liverpool in July 2013 but has failed to hold down a regular place in Alan Curtis' first-choice XI in recent weeks, having previously fallen from favour under Garry Monk prior to his sacking in December.

The 23-year-old started Sunday's 3-2 FA Cup defeat at Oxford United but was involved in a verbal altercation with a supporter after the final whistle.

Shelvey underwent a a medical on Tyneside on Tuesday after Newcastle agreed a fee believed to be in the region of £12million to sign him.

"I am very excited to be here," he told his new club's official website. "I am so glad that it is finally done.

"I drove up through the night to be here so it has been a manic 24 hours, but it has all been worth it to come here and play for this great club."

Head coach Steve McClaren was delighted to add a player he feels has an impressive level of top-flight experience for his age.

"I am delighted to welcome Jonjo to Newcastle United," said the former England boss.

"He has great experience for a young English central midfielder and is a current England international, so I am certain he will be a great addition to the squad.

"He is a player we have admired for some time and we are very pleased that we have now been able to bring him here."

Shelvey has made over 80 appearances for Swansea, with his form leading to an England recall for the 6-0 win over San Marino in September 2015.

And with the European Championship looming large at the end of the season, Curtis said at the weekend that the former Charlton Athletic man was eager to remain in the thoughts of national team coach Roy Hodgson.

The pair will be expected to bolster a Newcastle midfield which has looked short on quality since the departure of Yohan Cabaye to Paris Saint-Germain in January 2014.