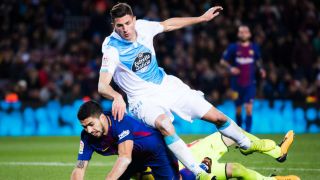 The 26-year-old centre-back, who spent just a single season in LaLiga with Deportivo, has signed an initial three-year contract with Rafael Benitez's side.

"I'm really happy to be here," he told Newcastle's website. "The club is a really big club for me. It has a big name, and it is a brilliant chance for me.

"I'm not like a typical defender. I, of course, defend, but I'm quite good with the ball – I like to play, I want to build up the game from behind, and I think that is a strength of mine. I have also scored some headers – that could also be a strength and hopefully I can use it here."

Schar was highly rated as a young player at Basel and initially settled well in the Bundesliga with Hoffenheim in 2015, but he struggled in his second season and was allowed to move to Spain last July.

He developed a reputation for a rugged and aggressive approach to defending in LaLiga, earning 10 bookings in 25 appearances last term.

The Swiss international joins the club from and has signed an initial three-year contract.Read more: July 26, 2018

Schar has 42 international caps and made three appearances at the World Cup in Russia but was banned for the last-16 defeat to Sweden.

"I'm really pleased to welcome Fabian to Newcastle United," Benitez said. "He is an international, did well in the World Cup and has great experience.

"He adds competition in this position and that is a positive for the team."

He becomes the club's fourth signing of the close season after Martin Dubravka, Ki Sung-yueng and Chelsea loanee Kenedy.

Rafa Benítez is pleased to have new signing as part of his Newcastle United squad.Read more: July 26, 2018