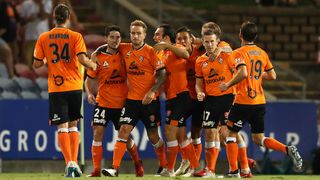 A-League strugglers Brisbane Roar avoided a sixth straight loss by battling to a 2-2 draw at Newcastle Jets thanks to a late Eric Bautheac header.

Darren Davies' side seemed set to slip to defeat at McDonald Jones Stadium for the second time this season, but they twice hit back to level the scores on Wednesday.

The Jets took the lead in the fifth minute, Dimitri Petratos seizing on a loose pass to dance past two half-hearted challenges and slot a low finish past goalkeeper Jamie Young.

Petratos almost doubled the hosts' lead in the 33rd minute but his free-kick cracked against the woodwork after beating Young, who kept out Nigel Boogaard's header.

Roy O'Donovan and Boogaard missed chances after the interval before Adam Taggart struck an equaliser against the run of play in the 65th minute.

Connor O'Toole spun into space in the Jets box and delivered an excellent low cross to the back post, with Taggart on hand to turn home from close range.

But parity lasted less than two minutes with chaos in Roar's area leading to a prone Boogaard squeezing a pass through to O'Donovan to restore Newcastle's advantage.

Roar captain Matt McKay almost stopped the rot for his side but was denied by the post, leaving Bautheac to head home a Nicholas D'Agostino cross to snatch a point with three minutes left.

And the Roar could have won the game in the closing stages with Jets goalkeeper Lewis Italiano having to be alert to make good saves from Dylan Wenzel-Halls and Taggart.