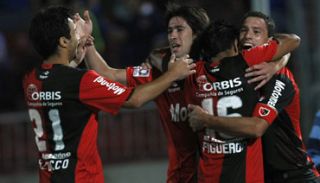 The points gap for coach Gerardo Martino's side was helped by Lanus' first defeat, 3-1 away to San Martin in San Juan.

Lanus' defeat enabled River Plate, who wore a new black strip to celebrate the 75th anniversary of their Monumental 1978 World Cup stadium, to climb above them into second place after they beat Atletico Rafaela 3-0.

With four matches to go in the Clausura championship, Newell's have 32 points, River 29 and Lanus 28.

Newell's, at their Marcelo Bielsa ground in Rosario, met Boca in the second of three clashes in a week between the two sides.

Both fielded a number of reserves, resting key players for Wednesday's second leg of their Libertadores Cup quarter-final at the same venue.

Thursday's first leg at Boca's La Bombonera was a 0-0 draw.

Peru midfielder Rinaldo Cruzado gave Newell's an early lead with a penalty after he had been fouled by goalkeeper Sebastian D'Angelo.

Boca had Lisandro Magallan sent off just before half-time for stamping on forward Maximiliano Urruti and were then brushed aside in the second half by goals from Horacio Orzan, Martin Tonso and Urruti.

The only possible joy Boca could have taken from the match was that the result did not benefit their arch rivals River, now Newell's closest challengers for the title.

River, in their best performance of the championship, wrapped up their win in the opening half hour, starting in the eighth minute with left-back Leonel Vangioni's searing drive from 25 metres that goalkeeper Guillermo Sara got a hand to but could not stop.

"It's a special day for all the fans, [the win] is a prize for them," River coach Ramon Diaz told reporters.

"It was one of our best first halves... we needed a show of what the team is capable of," he added.

River got the second when Rafaela defender Eduardo Dominguez deflected the ball into his own net in the 14th minute trying to defend a low cross close to the goal-line, while the third came when winger Juan Manuel Iturbe beat his marker for pace and then crossed to Carlos Luna, who headed past Sara.

The match at San Martin turned on a blunder by Lanus goalkeeper Agustin Marchesin in the 70th minute when he let an apparently easy high ball slip from his grasp and defender Damian Ledesma steered it into the net.

Ledesma then took off his shirt to celebrate, earned a second yellow card and was sent off.

Striker Gaston Caprari had put the home side in front in the seventh minute and midfielder Fernando Barrientos equalised in the 28th. Claudio Riano hit a fine late third for San Martin.

"Everything is so even in Argentine football that the top team can lose to the bottom. We knew [San Martin] were strong at home," Lanus coach Guillermo Barros Schelotto.