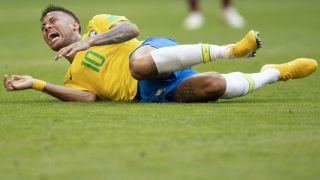 Neymar sometimes goes too far with his theatrics, according to former Brazil international Julio Baptista.

Brazil star Neymar came under fire for exaggerating fouls at the World Cup in Russia, where his team were eliminated in the quarter-finals.

Baptista believes the Paris Saint-Germain forward is prone to going over the top with his exaggeration, but added that Neymar was also frequently fouled.

"It is true that Neymar sometimes takes things too far, but we must remember that he gets kicked a lot," the 47-time Brazil international said.

"There are times when he is on the floor complaining about a foul and then the replay shows that this player [Mexico defender Miguel Layun] stepped on his ankle where he was in pain. So in football a lot of things get magnified.

"It is true that he dives sometimes – which is not good for football – but he gets kicked a lot too."

Neymar scored twice at the World Cup, but Brazil's run was ended by Belgium in the last eight.