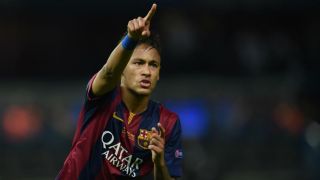 A close aid to Barcelona presidential candidate Joan Laporta believes the fiasco regarding Neymar's transfer from Santos could end up costing the Catalan giants €222million.

Laporta previously stood as president between 2003 and 2010, overseeing arguably the most successful period in the club's illustrious history.

Brazil international Neymar arrived at Camp Nou from Santos in 2013, but the deal has come under investigation, with accusations that the funds for the transfer were not appropriately distributed.

At a presentation of the economic plans Laporta has for Barca should he be elected president, Joan Oliver sounded a warning about the potential cost of the deal as the saga drags on through the courts.

"I think that when you look at the financial prospects for the coming years, there is one question mark: how much Neymar's final price will be," said Oliver, who Laporta plans to appoint as CEO.

"So far it is €100m, but with the legal proceedings that are ongoing, it could rise by €122m in pecuniary liabilities.