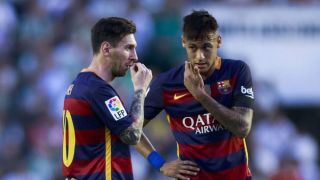 There have been three seasons, 85 goals and eight trophies, but Neymar's contract extension with Barcelona may well provide him with a new lease of life at Camp Nou.

After months of speculation and protracted negotiations, Brazil captain Neymar was finally tied down to a new five-year contract on Friday, ending reports of an impending exit to the likes of Paris Saint-Germain, Manchester United or even Barca's fierce rivals Real Madrid.

The 24-year-old only had two seasons left to run on the initial deal he signed upon moving from Santos in 2013, with his staggering impact since arriving key to earning a new contract.

Neymar struck 39 times, including efforts in the Champions League and Copa del Rey finals, as Barca secured a treble in Luis Enrique's first season at the helm in 2014-15.

The Brazilian's close relationship with team-mates Lionel Messi and Luis Suarez – the formidable MSN trio who combined for 131 goals in all competitions last season – has blossomed, playing a pivotal role in a domestic double last season.

While the statistics suggest it has been an easy ride in Catalonia for the Brazil captain, the reality is far from that.

Neymar's transfer from Santos has been the subject of legal cases in Spain and Brazil, with the player, as well as his father, accused of tax evasion.

As part of the investigation, the federal court of Sao Paulo ordered assets belonging to the Barca star to the tune of just under €45million to be frozen in February.

The Brazilian's form seemingly suffered as a result, bogged down in a quagmire of legal uncertainty he hit the back of the net just twice in seven appearances that month.

Although the case in Sao Paulo remains open, Barca in June agreed to pay a fine of €5.5m in order to close legal proceedings in Spain.

With that investigation behind him and his contract situation clarified, two huge weights will have been lifted from Neymar's shoulders.

A clear future and fewer distractions may well see Neymar flourish further, pushing on from the level that earned him a 2015 FIFA Ballon d'Or nomination.

The Brazilian was beaten to that award by team-mate Messi, but he may not have to play second fiddle in Catalonia for much longer.

If Neymar repays the faith shown by the club - represented in a buy-out clause that rises from €200m to €250m over the course of the new deal - he can position himself to be the long-term successor to Messi.

The Argentinian superstar, adored by the Catalonia crowd, has two years left on his current contract, but president Josep Maria Bartomeu understandably wants to retain him for as long as possible.

Now 29, Messi has previously spoken of his desire to return to his native country and play for Newell's Old Boys, the club where his phenomenal career begun before hanging up his boots.

While his recent retirement from international duty may have strained relations between himself and the Argentinian public, that feeling is unlikely to vanish.

Regardless of when, Messi's time with Barca will inevitably come to an end.

When it arrives, Barca have taken steps towards ensuring they have another star ready to take on the mantel of talisman and keep the good times coming in Catalonia.