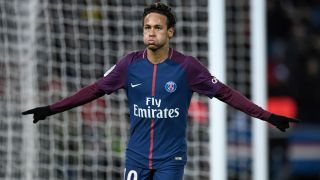 Neymar is loved and supported by Paris Saint-Germain fans, according to coach Unai Emery.

The Brazil international was jeered by supporters despite scoring four goals in an 8-0 Ligue 1 win over Dijon last week.

Neymar decided to take a late penalty in that victory, rather than allowing Edinson Cavani the chance to break Zlatan Ibrahimovic's goalscoring record for the club.

Speaking ahead of a Coupe de France clash against Guingamp, Emery said the 25-year-old, who may make his return from a thigh injury, is well liked.

"PSG fans love all the players of PSG. They love them individually. They're clever. I'm pretty sure that they are all happy to have Neymar here," Emery said.

"If Neymar is able to play I'm sure they will all support him and the team, all the players and also Neymar.

"When he plays, Neymar is happy. When he has a ball he's happy. If he's able to, he'll play.

"He'll play to enjoy a team's victory, to be with his team-mates and also for the fans."

A world-record signing last year, Neymar has scored 24 goals in 23 matches in all competitions for PSG.