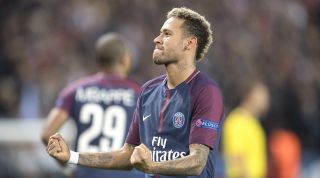 Real Madrid must offload three players in order to fund a move for Neymar, report Marca.

The La Liga side are battling rivals Barcelona for the signature of the PSG forward, who is determined to leave the French capital before the European transfer window closes on September 2.

Madrid are growing increasingly optimistic about their chances of capturing the Brazil international.

However, they must first sell Gareth Bale, Mariano Diaz and James Rodriguez in order to raise the necessary £186m for Neymar's transfer fee.

Madrid previously pulled the plug on Bale's proposed move to the Chinese Super League, but they will be happy to sell him if they can get the former Barcelona man as a replacement.

Neymar missed PSG's 3-0 victory Nimes in Ligue 1 on Sunday but was still subject to criticism from the club's fans.