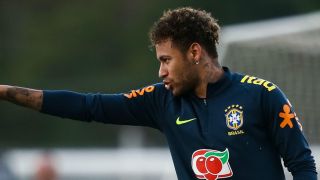 Neymar is ready to go to 'impossible' lengths to win the World Cup with Brazil at Russia 2018.

The Paris Saint-Germain forward is working his way back to full fitness alongside his international team-mates after suffering a broken metatarsal at the end of February.

Over the weekend, the 26-year-old told reporters of his determination to overcome fears of his body breaking down after three months out and he sounded a similar tone in an Instagram post that showed him looking longingly at the World Cup trophy in a display case.

"The walk began and I'm going to meet you," Neymar wrote.

"I know that I will encounter many difficulties but I will do the impossible to have you in my hands.

Neymar featured for his country on home turf at the 2014 World Cup but a back injury ruled him out of the 7-1 semi-final humiliation against eventual winners Germany.