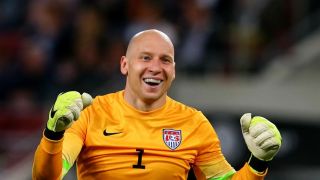 The USA notched their second impressive friendly result in the space of six days after coming from behind to defeat Netherlands 4-3 in Amsterdam, with Bobby Wood scoring the winner against Germany after also putting his side ahead versus the Dutch.

Wednesday's win over the world champions caught the eye of football fans worldwide, with the USA's customary hashtag #USMNT trending on Twitter.

Guzan, who started both games, also went on Twitter to revel in the victory, and urged his team-mates to take the momentum from their European Tour into the Gold Cup, which starts on July 7.

Midfielder Mix Diskerud, who scored the USA's equaliser at the RheinEnergieStadion with an impressive volley, added: "Unbelievable! We did it."

Meanwhile, striker Aron Johannsson, who was replaced by match-winner Wood, declared: "Nice week at the office!"