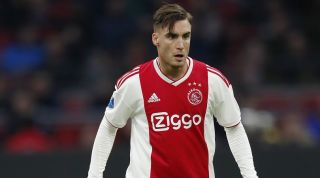 The Gunners remain in the hunt for the top four and took a huge step closer to a place in the Europa League final with a 3-1 victory over Valencia in the first leg of their last-four clash on Thursday.

Emery has yet to sufficiently tighten up Arsenal’s leaky backline, however, with the north Londoners possessing only the 10th best defensive record in the Premier League this season.

The former Sevilla boss had identified Tagliafico as the ideal long-term replacement for Nacho Monreal, who turns 34 next term.

However, the Argentinian announced in a Twitter video that he will remain at Ajax, who hold a 1-0 aggregate lead over Tottenham in their Champions League semi-final ahead of Wednesday’s second leg, for at least another year.

"Hello fans, how are you? I want to tell you that I will stay for one more season. Hopefully it will be a great year, like it is this year. A hug to all of you," he said.

Arsenal host Brighton in the Premier League on Sunday, before travelling to Valencia for the return fixture of their Europa League semi-final on Thursday.

The 15 best free-kicks of all time: where does Messi vs Liverpool rank?