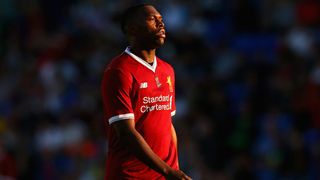 Liverpool boss Jurgen Klopp is not aware of any developments on a possible exit for Daniel Sturridge and says the striker could be in the squad to face West Brom on Saturday.

The England international, who has made only five starts in the Premier League this season, has been linked with loan moves to Inter, Sevilla and West Ham this month.

However, with just days remaining of the transfer window, Klopp says Sturridge is no nearer leaving the club and could be involved in the FA Cup fourth-round clash at Anfield.

Asked if there were any developments on the 28-year-old's future, Klopp told a news conference: "No. We didn't speak about it so far. No [change]. Yes [he can be in squad]."

One player Klopp does not intend to lose this month is Danny Ings, who has battled back to fitness following successive cruciate knee ligament injuries and hopes to make his first start under the German against the Baggies.

Klopp on Danny Ings being involved against WBA: “He is in really good shape, but there’s nothing to say about the line-up. During the week we had a few players ill, but not too serious. He is doing really well. The fact we don’t send him on loan shows our plans with him.” January 26, 2018

"He's in really good shape but I've nothing to say about the line-up," said Klopp. "We've had a few players ill, not too serious, so I don't know.

"He's doing really well and the fact we don't give him a loan or something else shows our plans with him.

"It's a very difficult time for Danny, I can imagine. Physically, he's completely there, I can't remember the last [training] session Danny wasn't involved in.

"He's still a young boy and has a lot of good years to come."

However, Klopp refused to rule out the prospect of some last-minute business for Liverpool as he wants to allow the entertainment of the rumour mill to continue into the middle of next week.

Asked if there would be any further business, he replied: "It's not really likely. Should I say '100 per cent no' and kill all the rumours? No, I shouldn't do that, let's enjoy it for another four or five days."