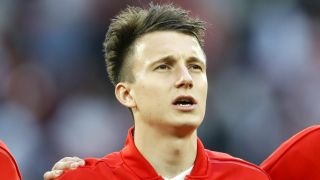 CSKA Moscow president Evgeniy Giner has confirmed Aleksandr Golovin is close to leaving the club but refuted claims a deal with Chelsea has been agreed.

Reports in the English media emerged on Tuesday suggesting Chelsea had won the race to sign 22-year-old Golovin, one of the stars of Russia's World Cup campaign.

The midfielder has become a hot property in Europe with Arsenal and Juventus both heavily linked, while Ligue 1 side Monaco this week revealed they had submitted a bid.

Giner expects Golovin's new home to become clear in the coming days and acknowledged he will leave CSKA to fulfill his potential and become a "big star".

"In order not to ruin [Golovin] we must let him go. But we have no solution for today," Giner told Russian outlet Sport24.

"When we receive an offer, we always try to negotiate openly.

"Indeed, we were visited by the vice-president of Monaco [Vadim Vasilyev] and made a proposal for Golovin.

"Chelsea? There is no closed arrangement with them. But the question of his transition to another club will be decided, I think, in the next couple of days."

Golovin appeared in all five of Russia's matches at the World Cup, scoring once in the tournament-opening 5-0 win over Saudi Arabia.

2 - Aleksandr Golovin was the only player in 2017/18 to score a direct free-kick in both the World Cup and a major European competition (v Arsenal in the Europa League). Finesse. July 17, 2018