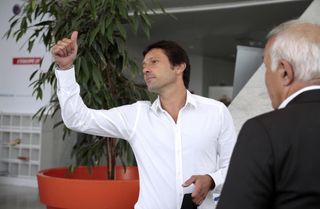 The Brazilian, 44, was handed the reins at Milan in 2009 for his first mentoring role, but would last just one season before hopping to rivals Inter, and seeing out only one Serie A campaign there too.

Out of the coaching hot seat for almost three years now, Leonardo said he does not rue any opportunity missed at the Milanese clubs.

"I left Milan because of personal problems and misunderstandings, seeing as I started to feel left to one side by the club," Leonardo told UOL Esporte.

"I was free at that point to accept any proposal and I had an excellent rapport with Massimo Moratti. I accepted the challenge of coaching Inter, which for me was a grand experience.

"Anyone who decides to join your team's arch-rivals has to pay a price, which is perfectly normal criticism.

"My respect for Milan never mutated and neither has my affection for Inter."

Since his tenure at Inter, Leonardo was involved with Ligue 1 giants Paris Saint-Germain, before ending his stint with the club in August.

Leonardo said he had no choice but to move to France, given the attractive offer on the table.

"I have nothing to regret. I left Italy because I received a proposal that was unique in football, as PSG offered me total freedom and autonomy to build a team worthy of the Champions League," he said.

"I had to accept their offer, just as the offers from Milan and Inter could not be passed up."