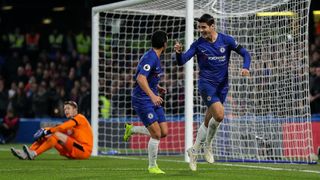 Chelsea striker Alvaro Morata conceded he even blamed the rain for missed chances during his fallow period in front of goal.

The 26-year-old hit a brace in Sunday's 3-1 win over Crystal Palace, moving on to five Premier League goals for the season.

But 2018 has proved a tough year for Morata, whose form deserted him to the extent that he was left out of Spain's World Cup squad.

"The most important thing is that, finally, I have found the right way and my head is okay," Morata told reporters.

"In football, physical condition is very important, but the head is the most important thing. If you don’t have the head, if the mentality is not good, then you are in trouble.

"I had a period where everything... if it's raining, I’m angry because it's raining. If I miss, it’s because the pitch is too wet. It was only excuses. It was not good.

"Everyone can have a bad period in their life. But we are famous, we have a lot of things.

"Sometimes people think we are not human, with no feelings, with no problems. The important thing is to find the right balance. Now I have, and I am very happy."

Morata would have been happier to have taken the matchball home and he was visibly annoyed after Palace goalkeeper Wayne Hennessey read his attempted lob when through on goal in stoppage time at the weekend.

"I suffered a lot in the past and I need to score three for myself, for my team and for the supporters. It was very important for me," he added.

"Honestly, I think I missed because I had only this in my head. If I don't think, probably I score.

"In the last 10 minutes, I only have in my head 'I want to bring the ball home' and I think that's why I missed. But I'm improving and this is the important thing."