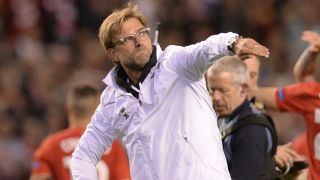 Jurgen Klopp has no complaints over Basel being the chosen venue for Liverpool's clash with Sevilla in the Europa League final and feels no stadium would be big enough to accomodate demand for the showpiece match.

Liverpool overturned a 1-0 first-leg deficit with a stunning 3-0 defeat of Villarreal at Anfield on Thursday and they must now thwart holders Sevilla as Unai Emery's men bid for an unprecedented third successive Europa League crown.

Twelve per cent of Liverpool's 10,236 tickets for the game will go to club officials, players, media and commercial partners which means Reds fans will receive an allocation of just 9,000 for the match at the 35,000 capacity St Jakob-Park.

Demand on Merseyside is likely to far outstrip supply but Klopp is unconcerned that the match will not take place at a bigger venue and, speaking at a news conference ahead of Sunday's Premier League game with Watford, he encouraged vast numbers of supporters to travel to Switzerland and be part of a memorable occasion.

"Basel is a wonderful stadium and wonderful city. It's worth going there even if you don't have a ticket," he said.

"We're not worrying about and thinking about the size of the stadium. If we say who wants to go we'll find 30 million who want to go. We have no chance of getting them all in the stadium."

In a statement released earlier on Friday, UEFA urged ticketless fans in Basel to stay away from the stadium when Liverpool and Sevilla meet on May 18.

The statement read: "UEFA is aware that many ticketless fans will travel to Basel to support their teams. However, we advise anyone without tickets not to approach the stadium on the day of the final since safety and security measures will be very tight.

"The stadium perimeter will be reinforced in order to guarantee safe and secure entrance for all ticket holders."

"Evidence from the recent finals suggests that stadium capacity and ticket allocation for supporters of the two finalists have been very satisfactory," UEFA said.

"For those questioning the size of the stadium for this particular final, we would like to note that the number of supporters requesting final tickets varies from club to club, and of course it is impossible to predict in advance which clubs will reach the final."

Two men who could travel in a more participatory capacity are club captain Jordan Henderson and striker Divock Origi, who are progressing well in their recovery from respective knee and ankle injuries.

"I don't know about Hendo. He was celebrating last night and I saw in his eyes he think he has a chance," Klopp said. "That’s the first and most important step.

"It's the same with Divock Origi. But we will see. I have no idea yet.

"The latest moment [to return] if you want to play in the final is for the Sunday before [Liverpool's final Premier League match at West Brom]. Hopefully we don't have to take any risks."