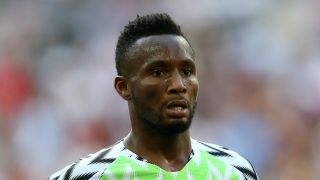 Nigeria captain John Obi Mikel is not worried about the prospect of potentially encountering racism in Russia at the World Cup.

FIFA fined the Russian Football Union £22,000 after France internationals Paul Pogba and Ousmane Dembele were subjected to racist abuse during a March friendly against the World Cup hosts in St Petersburg.

Nigeria open their World Cup campaign against Croatia in Group D on Saturday, with Mikel shrugging off concerns he or team-mates could face abuse during matches.

"No, I think everyone has been really nice," the former Chelsea midfielder told the media. "In the hotel, in the camp, everywhere has been amazing.

"The Russian people have been really nice to us. A lot of Russians support the Nigerian team, I don't know why, maybe because my girlfriend is Russian.

"This place feels like home for us. The support can help us."

"I participated in a UNESCO action against discrimination and we are all assured that there will not be any problems for the Nigerian players," Rohr added.

"Because the atmosphere we felt arriving in Russia was very good.

"We have a player in our team who is Russian, Brian Idowu, as well as Ahmed Musa who plays in Russia.

"Our players are young and they will go without any problems about discrimination."