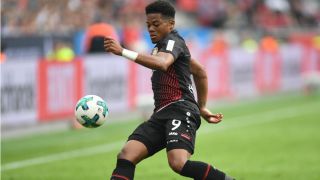 Leon Bailey's agent Craig Butler has dismissed suggestions he has spoken to Roma following speculation linking the Bayer Leverkusen winger with the Giallorossi.

The Serie A giants are reported to have turned their attention towards the 20-year-old Jamaican after missing out to Barcelona in the fight to sign Bordeaux's Malcom.

But Butler, who is also the player's adopted father, denied talks had already taken place.

"Roma were interested in Leon a couple of years ago, but since then I haven't heard from the Giallorossi," he told Tele Radio Stereo.

"I spoke with [Roma director Frederic] Massara then. I do not know [Roma sporting director] Monchi, maybe he does not have my number!

"I don't know if Roma are speaking to some intermediary, but they'd have to talk to me. It wouldn't be wise not to listen to Roma. Being linked to a great club like Roma is an honour if it were true."

Bailey joined Leverkusen in January 2017 from Genk and has impressed in Germany, scoring nine goals in 38 Bundesliga appearances.