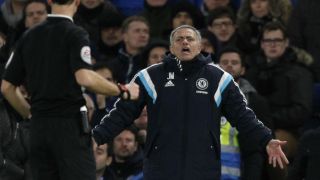 Mourinho has taken issue with his team's treatment by both match officials and the media over recent weeks and shunned his pre-match press conference for the top of the table clash against champions City, having been fined £25,000 by the Football Association this week over comments about referees.

Coverage surrounding Chelsea's top scorer Diego Costa also irked the Portuguese manager, who was without his Spain international striker due to a retrospective ban for stamping on Liverpool's Emre Can during Tuesday's League Cup semi-final triumph.

Mourinho said that there was a "campaign on the television with the certain pundits saying that Costa has crimes" after that match and refused to fulfil his pre-match obligations with Sky Sports before City's visit to Stamford Bridge.

After the match, in which David Silva cancelled out Loic Remy's 41st-minute opener for the hosts, Mourinho or a representative from his backroom staff again failed to speak to the assembled press - a move that could land him in further hot water with the authorities.

Chelsea lead the Premier League by five points from Manchester City with 15 matches remaining this season.