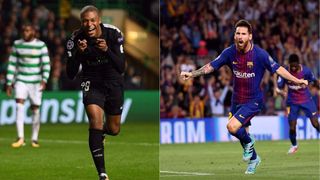 Pep Guardiola refused to predict whether Kylian Mbappe can reach the stratospheric levels of Lionel Messi, but warned "nobody can sit at the same table as" the Barcelona star.

Guardiola's Manchester City were one of the victims of Mbappe's sensational breakthrough campaign at Monaco last season – the teenager scoring in each leg of a thrilling Champions League last-16 tie that the Ligue 1 club won on away goals following a 6-6 draw.

In all, Mbappe scored 26 goals in 44 games as Monaco beat Paris Saint-Germain to the Ligue 1 title and reached the semi-finals in Europe.

Mbappe has since swapped the principality for PSG, linking up with Messi's former colleague Neymar as the Parisians look to muscle in on the fight for continental dominance.

The France international scored on his PSG debut, and followed it up with a strike against Celtic in midweek, but Guardiola says such feats at a young age do not guarantee future success.

"Nobody can sit at the same table as Messi," Guardiola said.

"Maybe Mbappe, he's a top player, he will be an outstanding player, I'm pretty sure of that.

"But to equal what Messi has done in 10 or 12 years, or Cristiano [Ronaldo], for example, we have to wait.

"I appreciate Mbappe wouldn't like me to put more pressure on his shoulders.

"I think Messi has the numbers of 60/70 games every season, in the big games, always being there to score and assist, never injured, always plays every three days, never injured because he controls his body.

"That's why I don't think we help with hypothetical suitors for him, saying you are going to be the new guy. So, let Mbappe have the fantastic career he will have and after we'll see in the future."

Similarly, Guardiola expressed his desire to ease the goal-scoring burden from prolific strikers Sergio Aguero and Gabriel Jesus, highlighting how his team must ensure they do not need a mercurial figure such as Messi to guide them to success.

He explained: "When I arrived to Barca, in my first press conference, I tried to say in that period I had a special player like Messi. Afterwards, I discovered he was the best player I had ever seen ever, but I didn't want to put the pressure on his shoulders.

"We have to make the game, and after he will make the difference.

"I don't want to put the pressure on Sergio or Gabriel, as typical strikers, to score our goals.

"A team is a good team when they have the quality to score goals but also has other options.

"Last season we didn't have that, and that's why we suffered. That's why this season we are going to try more with Raz [Raheem Sterling] in the middle, with Leroy [Sane] more in the middle, the guys with the mentality to score goals to be more closer together, to try to score more goals."