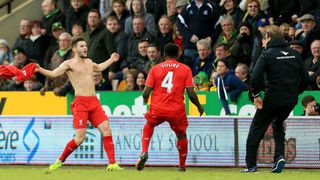 Liverpool appeared to be on course to win 4-3 when James Milner put them ahead 15 minutes from time, only for Sebastien Bassong to equalise with a superb 20-yard drive two minutes into injury time.

However, substitute Lallana - who had earlier set up Roberto Firmino to draw Liverpool level at 3-3 - had other ideas, as his perfectly controlled left-footed volley bounced into the ground and over Declan Rudd to settle an incredible game and spark delirious Liverpool celebrations.

Liverpool's day started well as Firmino opened the scoring in the 18th minute after a crisp passing move, but their defensive frailties allowed Norwich back in.

After Dieumerci Mbokani had levelled things up after 28 minutes, Steven Naismith put the hosts ahead as he scored another debut goal against Liverpool - having also achieved the feat for Everton.

A needless foul on Naismith from Alberto Moreno allowed Wes Hoolahan to give the hosts a two-goal cushion, but Henderson, Firmino and Milner turned the game on its head.

Yet there was more drama to come, as Bassong found Simon Mignolet's bottom-left corner with a sweet strike, before Lallana reacted quickest to some pinball in the Norwich area to snatch all three points for Jurgen Klopp's team.

After three league games without a win, Liverpool initially lacked intensity, but they broke the deadlock through Firmino.

Firmino slid a left-footed finish in off the post after patient build-up down the Liverpool left, the Brazilian netting after collecting Milner's superb pass.

But Norwich were level just before the half hour when Liverpool failed to clear their lines from a corner. The ball eventually dropped to Mbokani, who produced a powerful backheel from close range to beat Mignolet.

And the hosts went into the break ahead as debutant Naismith struck, the former Everton man firing low beyond Mignolet after an exchange with Hoolahan.

Liverpool's day went from bad to worse eight minutes after the break when Moreno brought down Naismith inside the penalty area, the Spanish full-back making two clumsy challenges on Norwich's new signing.

Hoolahan made no mistake from 12 yards to put Norwich 3-1 ahead, but their two-goal advantage was short-lived as Liverpool skipper Henderson pulled one back 96 seconds later.

A right-wing cross from Nathaniel Clyne was flicked by Firmino onto his captain, Henderson expertly sweeping the ball past Rudd.

Liverpool were level in the 63rd minute when Firmino calmly lifted the ball over the advancing Rudd for his second of the afternoon, and Milner then capitalised on a dreadful backpass from Russell Martin to race clear and restore the visitors' lead.

Bassong thought he had earned a share of the spoils when he rifled home Cameron Jerome's knockdown, but Lallana was on hand to settle a breathless encounter at the death.

- The first six shots on target in this game were all scored.
- Firmino has scored four goals in three games after just one goal in his previous 24 in all competitions.
- Liverpool have conceded from their first shot on target faced in all four of their Premier League games in 2016.
- Liverpool have conceded a league-high eight goals from corners this season.
- This is only the third time in Premier League history that Liverpool have recovered from two goals behind to win an away game – also against Man City in October 2008 and Fulham in October 2004.
- There have been four 5-4 results in Premier League history and Norwich have lost two of them (also v Southampton in April 1994).