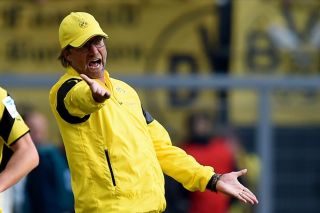 The Bundesliga outfit will face Arsenal, Galatasaray and Anderlecht in Group D in a decent draw.

Klopp is wary of the teams in the group, but said Dortmund would deal with the challenges presented.

"I don't know much about Galatasaray, but the city is very interesting. I've never played there or was there as a coach. It would be a very exciting trip for us," he said.

"Arsenal we know already. The team is little bit new but it's still an old acquaintance. It's not an easy draw.

"And Anderlecht, well you say that Belgium is the next power in the football. They have many talented players. Anderlecht have played really well over the last few years but in the end they always lost. But now they have more experience and it's not going to be easy.

"Our advantage is that most of our fans can go there [Belgium] by car which is very comfortable.

"It's not an easy group. We're starting to deal with it now. And when the fixture is clear we will be well prepared."

Klopp described Group D as "balanced" but said every group was tough in the Champions League.

"This is not a bowl of cherries. We were not wishing anything and this is what we got. And we have to look what we can do," he said.