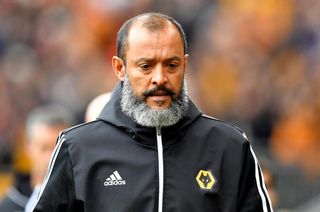 Nuno Espirito Santo insisted he must find the cause of Wolves’ slow start despite their Europa League victory at Slovan Bratislava.

Diogo Jota was sent off after collecting two yellow cards in just 73 seconds late on but Wolves survived the scare.

Andraz Sporar had given Bratislava the lead as Wolves recovered from a poor first half to move up to second in Group K.

“Everybody is happy, the first half was not so good but the second half was a very, very good performance,” said boss Nuno, with Wolves a point behind group leaders Braga.

“It’s something that we have to analyse, why we required so much effort in the second half.

“In the first half we didn’t play so well, we conceded a goal and we cannot do that.”

The majority of the 20,333 crowd were under 14 years of age with Bratislava having gifted the tickets after initially being told to play the game behind closed doors by UEFA because of racist behaviour from their fans in the play-off round.

Nuno added: “We didn’t expect to play in a stadium like this but the message was clear.

“The children enjoyed themselves because some people did something wrong so I think that sends a good message out. It was a good environment.”

Wolves went behind after 11 minutes when Sporar netted his 15th goal of the season, his strike deflecting off Conor Coady to outfox Rui Patricio.

It was a deserved opener for the hosts but the visitors improved following Adama Traore’s introduction at the break.

Goalkeeper Dominik Greif failed to stop Saiss’ 30-yard drive from finding the corner in the 58th minute and Wolves won it when Jimenez scored from the spot after he was pushed by Vernon De Marco.

Jota was then sent off with three minutes remaining for two quickfire bookings.

Nuno added: “He was frustrated, two or three minutes before the ball was out and it was our ball, the referee was clear and Slovan didn’t respect that, so that took him out of concentration and he made a mistake.

Bratislava are third, two points behind Wolves, and boss Jan Kozak felt they should have claimed a positive result.

“Of course I am disappointed because this was a game where we deserved a better result,” he said.

“We made some mistakes and big clubs punish mistakes like that, Wolves did that with two goals.

“At half-time they made some tactical changes and unfortunately we made some mistakes and were punished.

“We can still challenge for the first two spots, we want to take as many points as possible in the group.”