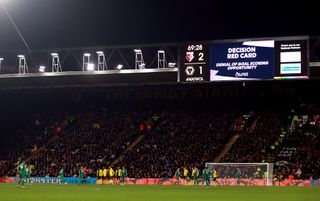 Wolves boss Nuno Espirito Santo is concerned by the reaction of fans to VAR decisions after Watford defender Christian Kabasele was sent off at Vicarage Road.

Kabasele’s yellow card for barging over Diogo Jota in the 70th minute was upgraded upon review in the belief a clear goalscoring chance had been prevented by the foul as the Hornets ran out 2-1 winners in the Premier League.

Although Wolves benefited from the decision, Nuno voiced his disquiet at the technology three days after two controversial decisions contributed to his side’s 1-0 defeat at Liverpool.

The Portuguese is particularly alarmed at the way supporters from both teams reacted angrily to VAR intervention.

“I haven’t seen the images yet but from the pitch I think Diogo had a clear chance at goal. It was one v one against the goalie. The referee saw it one way, VAR saw it the other way,” Nuno said.

“We have to get it clear for the game to flow and to have freedom of the ball. The Premier League is known for having good referees and good dynamism to the game and this is what we want.

“VAR should help the referee. The decisions referees make we should trust. VAR is video assistant referee. The referee should decide. It should be clear and obvious.

“One of the things that disappoints me is when the crowd starts singing – this is a clear sign. The referee should improve, VAR should improve.

“We must get used to VAR but the fans are not liking it and this is what worries me most.”

Watford boss Nigel Pearson refused to condemn VAR as his side survived a late siege to claim all three points to move within touching distance of escaping the relegation zone.

“I’ve not seen it yet but the players felt it was harsh because of the type of contact and the proximity of team-mates to deny a goalscoring opportunity,” Pearson said.

“Technology is good for the sport but clearly this season there will be a few teething problems. It’s still down to interpretation so there will always be a human element there.

“All sports that have introduced technology have had problems. Rugby has got it as close as possible to perfect because we can hear the discussion going on.

“Now that it’s here we’ve got to run with it. It’s disappointing to have a player sent off for the second home game on the trot. We’ll deal with it.”

Strikes in each half by Gerard Deulofeu and Abdoulaye Doucoure ensured Watford finished the festive period with 10 points from four games.

“There’s a lot of hard work still to be done and we’d be foolish to think the job is over because it’s far from over,” Pearson said.

“But we’ve given ourselves more of a chance by getting back into contact with the pack.”