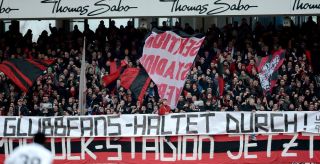 The first incident occurred during Nuremburg's 2-1 victory over Eintracht Braunschweig at the Grundig Stadion on February 22, with home fans throwing lighters onto the pitch during an opposition corner.

Following that, supporters set off fireworks during the 2-0 triumph over Stuttgart on March 26.

The German Football Association (DFB) has subsequently taken a dim view of those actions, imposing a hefty fine and ordering a partial stadium closure should there be any further misdemeanours in the next 11 months.

"The sports tribunal of the German Football Association (DFB) convicted the Bundesliga team Nuremberg after the charge of the DFB supervisory board procedure to a fine of €30,000, because of spectator affairs during two games in the current season," read a statement from the governing body.

"Beyond that, Nuremberg has to run two Bundesliga home games with partial exclusion of the public including closing spectator stands seven, nine and 11 in the lower level and the north stand.

"The enforcement of this measure will be set on probation for 11 months. This means the partial exclusion of the public will only occur if there will be further serious incidents during that time.

"During the Bundesliga home match against Eintracht Braunschweig on February 22, when the guest team was taking a corner, spectators threw lighters on the field.

"Furthermore, fireworks were (released) in the spectator stands seven, nine and 11, during the Bundesliga home game against Stuttgart on March 26.

"The club agreed to the verdict, (and) with that the verdict is final."