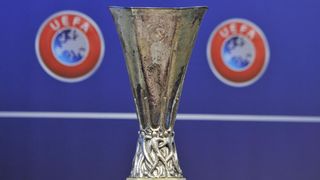 Dortmund coasted past Wolfsberger 6-0 on aggregate in the previous qualifying round, and Friday's play-off draw in Nyon handed them a tie with Odd.

Thomas Tuchel's side will travel to Norway for the first leg on August 20 before entertaining Dag Fagermo's men at Signal Iduna Park a week later.

Fenerbahce were beaten by Shakhtar Donetsk in their Champions League qualifier earlier this week, and Robin van Persie and co must now defeat Greek outfit Atromitos over two legs if they are to make it into the Europa League proper.

Ajax face Jablonec, while Premier League side Southampton were drawn alongside Midtjylland of Denmark.

Astra stunned West Ham on Thursday, and the Romanian club have been rewarded for beating Slaven Bilic's team with a play-off tie against AZ.