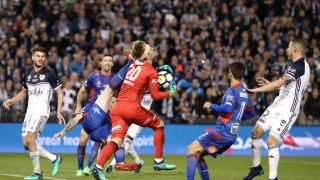 Roy O'Donovan will serve a 10-match ban at the start of the 2018-19 season after having his appeal against his red card in the A-League Grand Final dismissed.

The Newcastle Jets striker was sent off late in his side's 1-0 defeat to Melbourne Victory in May after a studs-up challenge to the face of goalkeeper Lawrence Thomas.

O'Donovan launched an appeal against the severity of the suspension – which includes league and FFA Cup matches – handed out by the Football Federation Australia.

However, that appeal has been rejected and O'Donovan will miss a large chunk of the new campaign.

"The player must therefore serve the sanction determined by the FFA Independent Disciplinary and Ethics Committee, being a 10-match suspension."

O'Donovan scored nine goals in 16 league appearances in 2017-18 and has a contract until the end of next season.