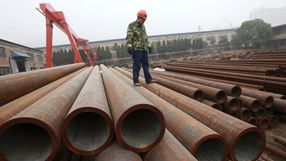 The pipes run under the site for the stadium on which construction was scheduled to start in April, little more than three years before the start of the tournament.

Transpetro, a subsidiary of the Brazilian state-run oil company Petrobras, said on Friday it was holding talks with Brazilian club Corinthians, whose planned Itaquerao stadium will be Sao Paulo's venue, to find a solution.

"Transpetro and the representatives of Corinthians are holding meetings with the aim of establishing alternatives which will make it viable to redirect the tubes in time to allow the building of the stadium," said Transpetro in a statement sent to Reuters.

"At the moment, the main choice being studied is the building of a diversion of the tubes to a nearby area. The discussions have been focused on the technical aspects and have not contemplated matters relating to the cost of the work."

Transpetro did not comment on whether the work could be completed by April 1, when work is expected to start on the stadium. Corinthians were not available for comment.

The oil pipes are the latest complication to hit the World Cup preparations of Latin America's biggest city.

The city initially planned to use the Morumbi stadium, owned by Sao Paulo football club, until the arena was barred by FIFA and local organisers last year over a lack of financial guarantees for the planned rebuilding.

Corinthians had planned to build their new stadium with a capacity of 48,000, while FIFA require a minimum of 65,000 for the opening match which Sao Paulo is hoping to host.

Negotiations are taking place over who will pay for the building of the extra 17,000 seats.

Last Friday, Brazilian politicians - including President Dilma Rousseff - threw their weight behind Sao Paulo for the honour of staging the opening match.

Mayor Gilberto Kassab said the city would "without question" host the opening match.