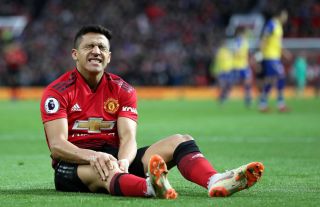 Ole Gunnar Solskjaer has backed Alexis Sanchez to turn his Manchester United career around this season.

Expectations were nearly as big as the 30-year-old’s eye-watering wages after United hijacked Manchester City’s move for the Arsenal forward in January 2018.

But Sanchez has failed to get anywhere near the heights scaled at the Emirates Stadium, mustering just two goals in a miserable, injury-disrupted campaign.

There continues to be widespread speculation about his future, yet Solskjaer remains confident that United will eventually see the best of the Chilean.

“Alexis is such a professional and he comes in working every single day, really hard, and he wants to be a part of this,” the United boss said.

“It’s these stories again that he’s been put in the reserves and all this – of course he hasn’t. He’s part of our squad and he’s a very, very good player.

“He’s had three weeks now, so he’s a few weeks behind the rest but he’s very close to being part of it.”

Asked if he will be an option as a striker this season, Solskjaer said: “We don’t have the biggest forward line in numbers, so Alexis might end up playing a lot more games than you expect.

“Because we expect him to come good at this club. He’s quality.”

Sanchez looks unlikely to be match fit for Monday’s tough trip to Wolves, but plans are afoot to get the likes of him and the late returning Fred up to speed.

“We’ve had a behind-closed-doors game and he’s training,” Solskjaer said. “He’s doing a little bit of extras and he’ll be gradually integrated into more and more playing time.

“But we’ll have more behind-closed-doors games because with one game a week now, it’s hard to keep everyone ticking so we’re arranging a few of them.”

Fitness on the whole has vastly improved, though, and the pre-season work was evident in the 4-0 thrashing of Chelsea last weekend.

“There’s a big shift from the difference between the teams,” Solskjaer said. “Chelsea outrun us quite a lot in April, three games ago in the league.

“Now we’ve outran them, so of course that’s a good shift for us but it’s not just about that fitness.

"Chelsea outran us in April but on Sunday we outran them — so that's a good shift for us," Ole says. "We had a young team so I expected loads of energy in them anyway, but we also had quality." #MUFCpic.twitter.com/TDQfSTT1T4— Manchester United (@ManUtd) August 16, 2019

“Fitness is important and we had a young team, so I expected loads of energy in them anyway, but we also have quality.”

That quality will be needed on Monday, when United will look to atone for last season’s Molineux defeats in the FA Cup and Premier League.

“You always go into any game positive, with the right intention thinking you’re going to win,” Solskjaer added.

“Of course the last two visits there… it’s almost like I feel like I’m going home, I’ve been there so often lately.

“They were tough games and Wolverhampton are a hard team to break down, they defend deep, don’t give you a lot of spaces, and they can play, they can counter-attack, set pieces are always dangerous.

“So, we’ve been looking at the games we’ve had last season, see if there’s any tweaks or different things we need to do this time.

“But our form, our attitude and, yeah, the mood after the win is great from last season, so we go into the game confident.”