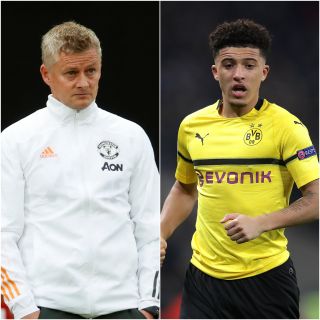 The Old Trafford giants are hoping to make the 20-year-old their marquee signing in a summer when, given the coronavirus pandemic’s impact, few other clubs can get near Dortmund’s lofty asking price.

The PA news agency understands discussions are ongoing about a deal for the England international and Solskjaer gave little away when asked about the benefit of getting transfers completed early.

“This transfer window is a long one and every transfer takes its course,” the United boss said as talk about Sancho dominates social media and column inches.

“It is what it is. At the moment, I’ve got no updates for you anyway so if there’s any news, we’ll update you.”

United’s interest in Sancho is well documented and it would clearly be an advantage to get the deal boxed off sooner rather than later, even if talk of Dortmund’s Monday deadline to strike an agreement surprised some at Old Trafford.

Solskjaer’s side will be just 60 miles south of Dortmund from Sunday barring an almighty shock in Wednesday’s Europa League clash against LASK.

United won first leg of the last-16 tie 5-0 in Austria back on March 12 and a Cologne quarter-final against Copenhagen or Istanbul Basaksehir will be the reward for wrapping things up at an empty Old Trafford.

“Jesse (Lingard) will be starting but the team won’t be too different from the team that played LASK away,” Solskjaer said sat alongside the attacking midfielder.

“We know it will be a difficult game. It wasn’t a 5-0 difference between the teams, we were winning 2-0 after 60 minutes and scored three in the last five so we know we have to perform and there’s opportunities for players to stake a claim, if they get through.”

Youngsters Teden Mengi, Ethan Laird and Ethan Galbraith have been included in a 30-strong Europa League squad that United defenders Axel Tuanzebe and Luke Shaw have been omitted from due to injury.

Solskjaer expects the injured defenders to be available from foot and ankle issues respectively when the Premier League gets under way in September.

Chris Smalling could be another lining up for United next season, with Roma’s inability to reach an agreement about extending his impressive loan spell meaning he leaves before the end of their Europa League campaign.

The defender said he was “gutted” that he “can’t finish what we started this season” as the Serie A side prepared to face Sevilla and Solskjaer is ready to welcome the 30-year-old back to Old Trafford.

“I think Chris has shown over his career at Man United how valuable he is,” the Norwegian said.

“This season was about him being a regular, going to Roma, showing and proving how good a centre-back he is.

“I wanted to give Harry (Maguire), Vic (Victor Lindelof), maybe Axel (Tuanzebe) a chance, so we found out that was the best for him to go to Roma, play for a year.

“Now he’s coming back and Chris has shown this season that he will be valuable. I’ve been speaking to Chris throughout and been delighted with his season.”

By contrast, Alexis Sanchez has got the green light from United to feature in the Europa League for Inter Milan.

The Chile international has been an unmitigated flop at Old Trafford and PA understands discussions over an exit continue, having been given the go-ahead to feature for Inter against Getafe on Wednesday.

United could face Antonio Conte’s Nerazzurri in the August 21 finale in Cologne should both sides make it that far in Germany, where Solskjaer expects to stay rather than fly in and out of.

“There’s been a discussion at a higher level than me as to how the tournament will pan out,” he added. “At the moment it looks like we’re staying.

“Of course, you could look at it as just one game and you travel to an away game. But at the moment it looks like a tournament so we’ll be staying in Germany.”