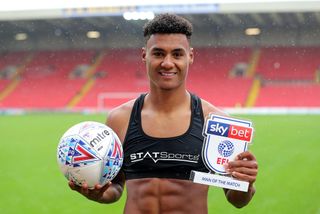 Ollie Watkins scored a hat-trick of headers as Brentford came from behind to win 3-1 at struggling Barnsley.

After Cauley Woodrow fired Barnsley ahead in the opening minute, Watkins levelled and also hit the post and crossbar in the first half.

The striker then secured the three points with two in the second half to end Brentford’s run of just one victory in seven games.

Barnsley are now without a win since the opening day of the season.

They made a fine start courtesy of Woodrow, who curled the ball into the top left-hand corner of David Raya’s net.

As the hosts continued to apply early pressure, Conor Chaplin had a shot blocked and Woodrow saw his effort from inside the area deflected for a corner.

Brentford had a good chance to level in the 25th minute when Watkins found Said Benrahma who burst into the area and fired in a shot which produced a good save from Brad Collins.

Chaplin then put a shot on target from inside the area, but it was comfortably saved by Raya.

Chaplin was involved again moments later. Raya raced out of his area as Luke Thomas threatened, but he failed with an attempted clearance and Thomas squared to Chaplin whose effort was blocked by Pontus Jansson.

The equaliser came in the 35th minute when Benrahma set Mathias Jensen free on the right and he delivered an inch-perfect cross to the unmarked Watkins who headed in from close range.

The home side rode their luck four minutes later when Brentford should have taken the lead. Watkins hit a post with a low shot, rattled the bar with his follow-up and the rebound fell to Benrahma who fired wide from a great position.

Watkins scored his second goal of the match inside the opening minute of the second half to put the visitors ahead, heading in at the far post after Collins misjudged a Sergi Canos cross from the right.

Brentford continued to pose the greater attacking threat with Jensen having a shot deflected over and Canos firing into the side-netting after being put through by Benrahma.

It was no surprise when the visitors increased their lead in the 68th minute. Watkins completed his hat-trick with a header from a Canos cross, with the ball crossing the line despite Collins getting a hand to it.

Barnsley never threatened to mount a comeback with Brentford continuing to look the more likely scorers.

The impressive Benrahma put a low shot wide and then fired in a free-kick which was comfortably saved by Collins.