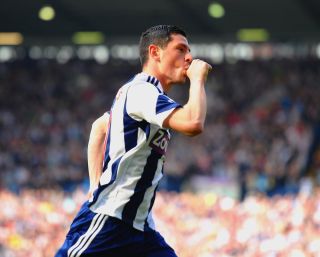 The Scotland international midfielder has been an ever-present for West Brom in recent weeks, starting the club's last six Premier League matches.

Dorrans was rarely used prior to that, but two goals in his last four matches – including a special effort in the club's 3-1 loss at Manchester City on Monday – have showcased his quality.

The Hawthorns outfit sit three points above the relegation zone with four matches to play and Olsson told the club's official website: "He's in great shape and doing very well in his last few games.

"It means a lot to have him in good form. We know he can get a few goals, is good on set-pieces, can get assists and has a good work-rate.

"It is good to have him back to his normal self.

"He has had a tough season but he's done very well in the last few weeks."

West Brom's next clash is a home fixture against the 12th-placed West Ham on Saturday.